Background
It is not enough sensitive to use a qualitative detection method with sensitivity of 1% to determine EGFR status in advanced NSCLC and guide precise therapy in clinical practice. Objective: To explore the relationship between the abundance of EGFR mutations and efficacy of EGFR-TKIs. 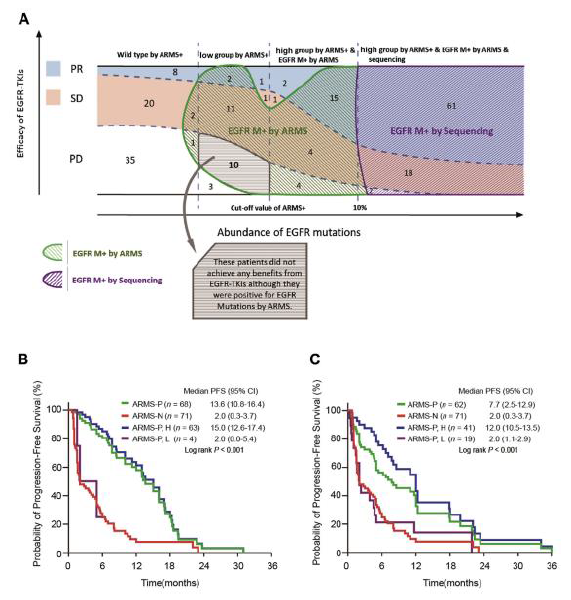 Figure: The difference in response to EGFR (tyrosine kinase inhibitors) TKIs and progression-free survival in response to EGFR TKIs between patients with EGFR wild-type NSCLC and those with EGFR-mutant NSCLC identified by the amplification refractory mutation system (ARMS) optimized with competitive blockers and specific mutation quantitation (ARMSþ), ARMS, and sequencing. The patients with EGFR mutations by ARMS but low abundance of EGFR mutations by ARMSþ from tumor tissues may achieve few benefits from EGFR TKIs. (A) The percentages of patients who achieved a partial response, stable disease, or progressive disease differed with the change of abundance of EGFR mutations in this study (numerals are numbers of patients). Progression-free survival of the groups stratified according to specific mutation status for exon 19 deletions (B) and L858R (C) by the ARMS method and ARMSþ. ARMS-P, positive group with a positive result by ARMS; ARMS-N, group with a negative result by ARMS; ARMS-P, H, patients with a mutation abundance higher than or equal to the cutoff by ARMSþ in the ARMS-P group; ARMS-P, L, patients with mutation abundance lower than the cutoff and greater than 0.1% by ARMSþ in the ARMS-P group; CI, confidence interval.