Methods
We tested ALK fusions and EGFR mutations in 629 patients with LADC by using laser-capture microdissection to capture spatially separated tumor cell subpopulations in various adenocarcinoma subtypes and to test for ALK fusions and EGFR mutations in ALK-rearranged, EGFR-mutated, and ALK/EGFR coaltered LADCs to compare the oncogenic driver status between different tumor cell subpopulations in the same primary tumor.

Results
Among the 629 patients, 30 (4.8%) had ALK fusions, 364 (57.9%) had EGFR mutations, and two had ALK fusions that coexisted with EGFR mutations. Intratumoral heterogeneity of ALK fusions were identified in nine patients by reverse-transcriptase polymerase chain reaction. In the two patients with an ALK/EGFR coaltered status, genetic intratumoral heterogeneity was observed both between different growth patterns and within the same growth pattern. The relative abundance of ALK and EGFR alterations was different in the same captured area. ALK fusions were positively associated with a micropapillary pattern (P = .002) and were negatively associated with a lepidic pattern (P = .008) in an expanded statistical analysis of 900 individual adenocarcinoma components, although they appeared to be more common in acinar-predominant LADCs in the analysis of 629 patients.

Conclusion
Intratumoral genetic heterogeneity was demonstrated to coexist with histologic heterogeneity in both single-driver and ALK/EGFR coaltered LADCs. Altered oncogenic drivers in spatially separated subclones of the same tumor may be different. 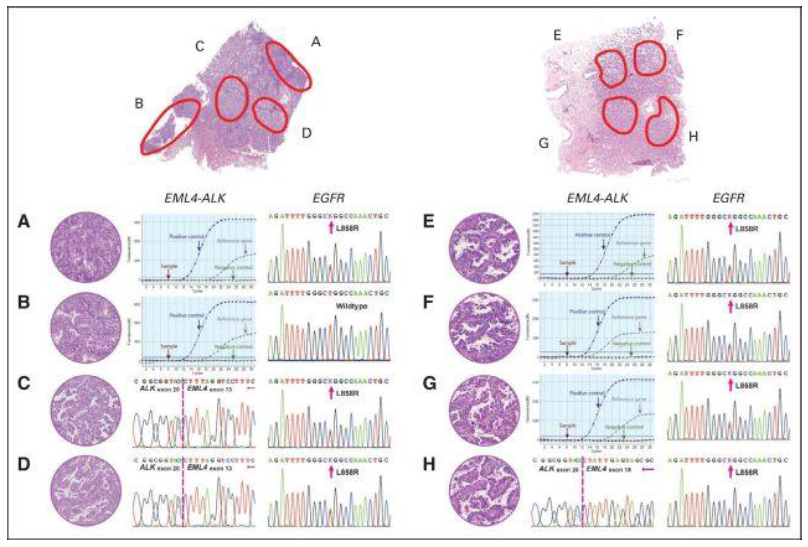